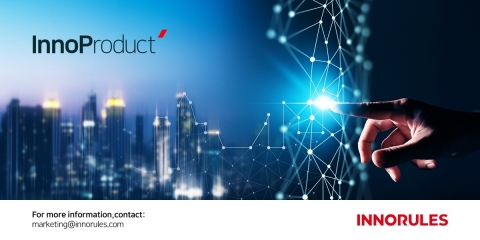 INNORULES (CEO, Kil Kon Kim) announced that it supplied the company’s Digital Decision Manager (DDM) to the future innovation project of one of the biggest insurance companies in Japan and the first stage system has been opened.

INNORULES’ Digital Product Manager (DPM) is a product information management system that supports the development of new products quickly and easily by disassembling and assembling the product information, structure and attributes. INNORULES, a Korean professional developer of Business Rule Engine, supplied the Digital Product Manager to the innovative digital transformation project of one of the biggest insurance companies in Japan. INNORULES is planning to expand into the South East Asian financial market upon this opportunity. (Graphic: Business Wire)

INNORULES is a professional developer of a Business Rule Engine (BRE) solution. BRE simplifies tasks and improves the speed and efficiency of system building. Many Korean financial companies including insurers, brokerages, and banks have adopted the INNORULES’ product.

The Japanese company has been preparing for this next-generation project since 2016. It is the biggest project in 30 years with an investment of about USD 1.75 billion.

The Japanese company first met the INNORULES product when they visited Korea to benchmark Korean insurance companies and it eventually chose INNORULES after conducting the Benchmark Test.

In addition, INNORULES played a role in the core of the project by improving the performance of the client’s legacy system, which is composed of massive accumulated data. Previously, it was difficult to convert a new product swiftly since it needed to consider the impact of adding new products on the existing system.

The newly launched system utilized INNORULES’ DPM to standardize common tasks and to separate product development processes according to the characteristics of products. The Japanese company is expecting to reduce the time to develop and modify a product by one-third from almost a year. The company plans to introduce the newly adopted system to their car insurance and fire insurance system by 2025.

INNORULES is planning to expand into the South East Asian market upon this opportunity.

INNORULES’ Chief Executive Officer Kil Kon Kim said, “It is very meaningful to provide our product for the core business of the Japanese financial company that is usually very cautious. Having been recognized for our stability and technological capability for years, we receive continuous inquiries from other Japanese financial companies since a new system launched through the recent contract.”

“Based on the deals with the Japanese company and domestic companies, we are planning to expand into the major South East Asian countries including Indonesia and Malaysia that are preparing for new financial projects,” Kim added. “We expect more than 20% growth of the overseas sales this year.”